Are you finding yourself practicing social distancing and need something to keep your attention? Why not give Steven Universe a try! 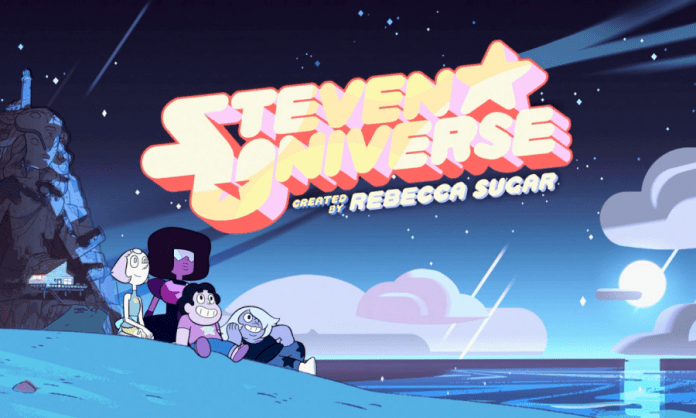 The Crystal Gems are a team of magical beings who are the self-appointed guardians of the universe. Half-human, half-Gem hero Steven is the “little brother” of the group. The goofball is learning to save the world using the magical powers that come from his bellybutton and he goes on magical adventures with the rest of the Crystal Gems, even though he’s not as powerful — or smart — as fellow group members Garnet, Amethyst and Pearl. Despite his shortcomings, Steven usually finds a surprising way to save the day.

The entire show is from the perspective of one Steven Universe. When the series begins, he’s fourteen years old and he’s distinctly different from the other teenagers of Beach City. Some of those differences come from the fact that he’s not entirely human while other differences come from being raised by three Crystal Gems who don’t understand all things human, despite living on earth for five thousand years. He’s a quirky protagonist who has a lot of relatable growing pains in the early seasons but has the biggest heart in the universe and just wants people to be happy and safe.

This show is fantastic. I don’t want to give any spoilers, but the production team that Rebecca Sugar, who stopped working on Adventure Time to begin Steven Universe, put together to create their vision has done an amazing job. (Sugar is also the first woman to create a show for Cartoon Network and identifies as a non-binary woman who uses both she/her and they/them pronouns.) The animation is unique, the voice acting is top quality, the story is light when it needs to be and heavy when the audience least expects it, and the use of music throughout the entire series is the ultimate throughline between all of the characters. That’s not to say that the cartoon is a musical, though.

The first episode for me was a little misleading. I made the mistake of not being interested in the show back in 2015 when my roommate tried to show it to me because they had me watch episode one, which basically amounts to Steven being really upset about a brand of ice cream no longer being in production and the then thinking that that type of ice cream was the key to using his powers. A lot more happens in the episode than that but it was enough for past me to think “wow this is a whiny kid. I don’t want to watch this.” It wasn’t until 2018, when my girlfriend and I moved in together, that I was able to give it another try. One night after we’d moved, I walked out of the kitchen to see her watching what looked like a cool animated show. I asked her what it was and she explained that she was in the middle of re-watching part of season four and that I shouldn’t watch too much cause there were some pretty big spoilers coming up. We then chatted about my reaction the first time I watched it and she laughed, saying that I really needed to give it another try. So I did. She stopped watching where she was and pulled up season one and we both sat on the couch and began watching it from the beginning.

It took me some time to get into the show but seeing the later episode helped because it kept me interested as I knew that the plot would kick in at some point. The early episodes felt a little disjointed and episodic, not really feeling like one led to the other. The thing that is beautiful about Steven Universe, though, is that the various plot threads start to be sewn extremely early. Even things from the first episode come back later in fairly significant ways.

When my girlfriend I finally got caught up with the show I was actually a little upset with myself for not letting my roommate get me into it three years earlier. It. Is. SO. GOOD! There are so many things that lead to spoiler territory so I am intentionally keeping details sparse, but I promise the show is amazing! It tackles so many things, like love, family, toxic relationships, trauma, mental health, and so much more in ways that you aren’t even aware that you’re seeing it until you think about it later or a plot twist happens and you have the crushing realization alongside Steven or the applicable character. Each and every consistent character has character growth and development, even characters who seem to have it all together from the very beginning.

On top of the themes that the show handles, the show is super queer! The Crystal Gems are all portrayed with feminine bodies and there are love stories between gems, even a queer wedding! There are also normal human characters who are portrayed as non-binary and there are singular uses of “they/their/them” for characters in Steven Universe Future (the current season that is airing). The cast is also diverse, showing people from all skin colors and tries to also show diversity in other ways, like having characters who wear a hijab. The voice cast is extremely diverse, having only two consistent voice actors who are white, while the rest of the voice acting cast are people of color.

Steven Universe has something for every viewer. Don’t make the same mistake I did when I first tried to watch it and write it off as a bad kids’ cartoon because it is nothing of the sort. This cartoon will make you laugh, gasp, and cry with how it weaves through its incredibly intricate plot. It is a show that, if you have a child in your life, they can watch and have things like non-binary people or same-sex couples normalized, or open the conversation up to them about mental health and why talking through our emotions is healthy.

Steven Universe is really quite special. COVID-19 and social distancing aside, I believe that everyone will get something out of this cartoon series and should make some time in their future to give it a watch.

Recommended Reader: Anyone at any age. This is a great show for kids, for parents to watch alongside their kids, or for adults who don’t have kids in their life. The show tackles so many things that it can be appreciated by any age and any viewer.

You can watch Steven Universe with a Hulu, Sling TV, or YouTube TV subscription. Episodes are also available on CartoonNetwork.com so long as you have a TV provider. Episodes can also be purchased through Amazon and iTunes.