Are you looking for a campy women-loving-women (wlw) spy movie spoof?  Well, look 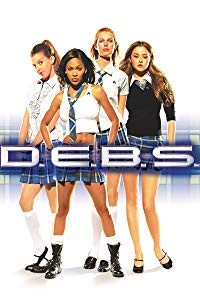 no further because D.E.B.S has what you’re looking for!

Sultry crime boss Lucy Diamond is back in the states and the D.E.B.S – an elite team of paramilitary college co-ed superspies – are hot on her trail.  But when their top agent, gorgeous Amy Bradshaw, mysteriously disappears after coming face to face with the attractive young villainess, the D.E.B.S begin a full-scale search for Lucy’s secret lair, never suspecting that Amy may not want to be rescued after all, in this smart and sexy spy spoof.

If the description of the movie makes you think that this is an intentionally bad film, then you’re right.  This movie was made in 2004 when movies like Napoleon Dynamite, Mean Girls, and Anchorman were hitting the box office and is definitely a product of the early 2000’s.  There are some dated phrases that I don’t care for now as an adult but were definitely a part of my vernacular in high school.  D.E.B.S was even the first wlw movie that I had ever seen as a young confused little lesbian sophomore.  Although it is a self-declared spy spoof and is indeed incredibly campy like many other movies to come out that year, it is a fun movie with some pretty good morals and themes in the end.

This isn’t coming from a place of being starved for queer media.  Yes, my nostalgia for this movie stems a little bit from that but watching it again in my twenties I still enjoy this movie and not simply because it shows two women in a relationship.  Before I re-watched the film, I was worried that the whole romance stemmed from a Stockholm Syndrome plot, as it had been ten years or so since I’d originally seen the film.  When you’re young and starved for media that represents you, you tend to forget some of the problematic things about a movie or book simply because it’s the media you had available to you.  Re-watching this film I was actually super happy to see that although Lucy initially kidnaps Amy (and the kidnapping feels more like a college party prank than a come with or die kidnapping), there is never of moment of “you have to stay here” or that Amy is in any actual danger with Lucy.  There’s actually a moment when Lucy is asking Amy to stay and Amy says she wants to go home.  She does say it twice, but Lucy agrees and she and the other D.E.B are taken back to their house.  It’s a small part to the larger scene but it was significant to me because it stressed consent and that is a message that I think ALL romantic plots should have.

The film falters mainly because it is a product of its time with using phrases like “that’s retarded” and Janet calling Amy a slut and a whore simply because she was almost kissed by Lucy when they are both kidnapped in the first half of the movie.  The acting is what you’d expect from a film that doesn’t take itself very seriously, the writing is fine, the fight scenes are laughable, and the overall pacing is decent.  There isn’t anything about the movie that is a huge wow factor and makes you outright love the film.

The film does let you know from the beginning what type of movie to expect, however.  When we’re first introduced to Lucy Diamond and her right-hand cohort Scud, Scud is trying to convince Lucy to go on a blind date with a Russian assassin and that’s why she’s back state side.  It’s not at all a serious spy movie and makes fun of the genre, especially during the poorly done green screen moments of the D.E.B.S, Homeland Security, the FBI and the CIA staking out Lucy’s date from the rafters of the ridiculously tall restaurant.

I liked that this movie centered around a group of women who, in the end, chose to support each other instead of continuing to do as they’re told by their jobs (i.e., society).  I also liked that it is a love story without a drawn out dramatic coming out story.  Don’t get me wrong, coming out stories are valid and are needed in queer media, but this film wasn’t the spot for it.  A dramatic coming out story wouldn’t have fit the tone of the film and I’m perfectly okay with that.  It amounts to Amy concluding that “I like this person – I’ll figure the rest out later” and I thought that was a great way to handle in within the parameters of the story itself.  The film, like most films, could be more diverse, but I did like that the main group of women had two women of color without perpetuating any type of race stereotypes.

The proverbial cherry on top of all that, D.E.B.S was conceived, written, directed, and edited by Angela Robinson – an openly gay woman who went on to work on L-Word after D.E.B.S wrapped.  I really enjoyed that it was directed by a queer lady for queer ladies.  The film doesn’t visually objectify any of the female cast and passes several feminists film tests.

Is this film a cinematic marvel?  Absolutely not.  It is a product of its time with its problematic phrases, slut shaming, and low budget filming quality.  Despite all that, it is still an enjoyable watch.