Book Review: Life Minus Me, by Sara Codair

Life Minus Me was far deeper than I anticipated for a novellette, with a multitude of depth in each character, including secondary characters. It took me into a world I wanted to slip into, with mind reading half angels, premonitions, candy obsessed pixies, and demons. Plus dogs. Can’t forget the doggos.

I’d like to add the following content warnings prior to the blurb as well as the review for:

Depression, self-harm, suicidal ideation, mentions of a past miscarriage, infertility, and [Spoiler] a suicide attempt by a main character. [End spoiler] 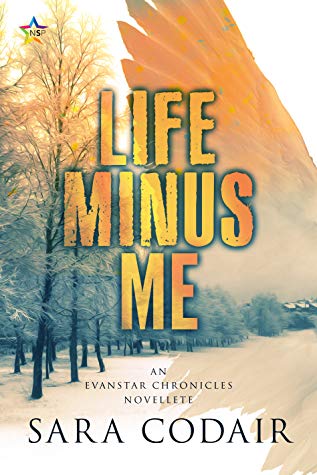 Mel is half-Angel, but despite her ability to heal and read minds, she feels powerless to help anyone. When a prophecy shows a local pet supply store owner driving their car off a bridge, Mel sets out to stop it.

Baily, owner of Barks and Bits, is barely holding it together. Things keep going wrong, and their depression spirals out of control. Just as they start wondering if they’d be better off dead, a new friend provides a glimmer of hope. But is that enough to keep living?

Mel never thought saving Baily would be easy, but she can’t figure out when, where, or why Baily’s suicide will happen. As her confidence fades away, she wonders how she can help anyone when she needs so much help herself.

Half angel, pre-med Mel has the ability of telepathy and healing, though she’d much rather have wings. For the most part, she’s able to block out the nonstop inner thoughts of those around her as long as she keeps her guard up. Her opinion on being half angel is complicated: her inner mission is to help others, which she has trouble doing, or so she thinks. Her cousin, Erin, is also not fully human, though they don’t know this yet. As this is a prequel to Codair’s book Power Surge where Erin is the main character, they have yet to discover their true heritage in this story. They have wicked, vivid dreams that they don’t know yet are premonitions.

When Erin and Mel get together at a diner and Erin sees an individual they saw commit suicide in their dreams, they confide in Mel about their dream. Mel recognizes it as a possible premonition and quickly tries to befriend Baily, the person Erin recognized.

Baily runs and partially owns a store for dogs and their human owners with their uncle, Cooper called Barks and Bits. When Uncle Cooper suffers from a massive stroke—at a diner in front of Mel and her cousin, no less—Baily is left to tend to the store by themself. This is no easy feat for anyone, especially a person who struggles with anxiety and depression on a daily basis. As someone who struggles with these, I think the portrayal of Baily’s difficulties was spot on. I was able to connect with them instantly, through their internal rationalizations—no matter how irrational they seemed—and their negative self-talk, they came to life on page for me. Some of these internal thoughts were painful to read, but I was pre-warned with appropriate content warnings before delving into this book and I’m grateful for that.

To Baily, their life is a mess. Between their uncle having a stroke, their dissolved relationship, their neighbors’s dogs always fighting and Baily feeling responsible for it, they hold onto a ton of guilt, harmfully internalizing it.

I saw other reviews concerned about having not enough information if you haven’t read Power Surge. Although I plan to read it, I haven’t yet and I don’t think it was necessary to have read it prior to Life Minus Me. I understood the characters, their plights and the fantasy elements within the story just fine.

That being said, I do wish I would’ve read Power Surge beforehand to understand a bit more behind the intriguing tension between Mel and her cousin, Erin. It briefly mentioned that, by listening to Erin’s thoughts, Mel thwarted their past suicide attempt, and Erin appears to have conflicted feelings around the event. In the beginning, they seem to hold Mel’s actions in a dark light, as if she didn’t do Erin any favors by preventing them from harming themself.

I also expected to see a bit of growth for Baily in their self-confidence and possibly some resolution between them and their ex-partner, but the ending still left me satisfied.

I’m definitely picking up Power Surge to discover more of this world of demon hunting half angels, elves with premonitions, and pixies who can be bribed easily with the right amount of candy.

Recommended Reader: Readers looking for an urban fantasy story that deals with mental illness and provides a happy ending.