Sitting in our local movie theatre with my father, who is too tall for the tiny rowed seats, we both tried to not completely dismiss every single movie trailer prior to our film of choice for the evening (with the bad trailers to preface the movie, I shouldn’t have been surprised that my father’s taste in movies isn’t great, but we’re not here to talk about that movie).  One of the trailers that piqued my interest, however, was the official trailer for the live action Ghost in the Shell with Scarlett Johansson.  This trailer has probably been out for a while but this was my first time seeing this particular one.  Not fifteen seconds into the reel, my would-be hackles started to rise as the trailer continued.

But Brittany – why are you talking about Ghost in the Shell on the Queerblr?

Canonically, the Major (Motoko Kusanagi) is queer.  I’m not sure what her orientation truly is but in the original anime ther 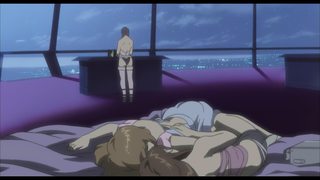 e is a scene in episode 5 where she’s looking through a case file and in the background, there are two women in a bed.  The scene heavily implies that Kusanagi is involved (sexually and/or romantically) with these women.  And later in the series, you see the women again in intimate settings with The Major. So that’s enough a reason for me!

I will admit that I’m not the subject matter expert on Ghost in the Shell by any stretch of the imagination.  I have only seen about half of the original anime and one of the animated movies, but I do live with someone who aspires to be The Major someday.  So my knowledge of the story, characters, and the universe is relatively sparse.  What I do know and remember is that it takes place in a futuristic Japan and that Kusanagi and her detectives work in a law enforcement capacity and that they all have cybernetic enhancements (and the Tachikoma are adorable killing machines).

If any of you dear Queerders have been following the Ghost in the Shell launch, you’re probably well aware of the backlash that the movie is already receiving for casting Scarlett Johansson, as my housemate has kept me well apprised of. So let’s dig in, shall we?

Don’t get me wrong, I love Scarlett Johansson. I think she’s fabulous both as an actress and as a spokesperson for female representation in media and how women are interviewed (like when she and Mark Ruffalo did a “gender reversal” interview: here).  However, the first impression that this trailer gave me about the overall casting choices of the film is that all of the lead roles were given to white actors and all the supporting cast and extras were of Asian nationality. (I have not done any further research on casting, as I wanted this to be a true first impression of what I got from the trailer.)  Casting white actors in the lead roles bothers me for a couple of reasons; conversely, I can understand—to a point—why The Major isn’t specifically Japanese.

What initially bothers me about having the leading protagonists as white actors and the supporting casts and extras being of Asian nationality is that it creates a perceived hierarchy of race.  The lead actors will always be seen as “greater than” the rest of the cast, as they are the focal point of the story and are elevated often to a “hero” status (white hero™), while the other members of the cast (and other races) are seen as villains or people in dire need of help.  Having The Major and her squad be predominately white makes them seem like they are of a higher social status or ranking than that of their non-white cast members, creating a silent imbalance to the power dynamic.  Whether that is the actual intent of the casting director or production team is probably not the case – but because the difference is so noticeable, it creates the unintentional implication of race hierarchy and that doesn’t sit well with me.

For those of you who are familiar with Ghost in the Shell and The Major, you know that she’s substantially made up of cybernetics and just shy of being an AI or Cyborg or Android, depending on who you ask and your views on synthetic life forms.  With that in mind, yes – The Major could look however she or her “creator” wanted her to look.  In the anime, she and the rest of the cast look white (which a lot of the Animes made in that era did, honestly), but she at least has a Japanese name.  So sure – The Major could look as white as she wants, but then it goes back to the whole “her creator could make her look however they wanted” and they chose to make her white, which continues the implication that white is better than or greater than being perceived as a different race, and anything other than white is seen as lessor.

When I initially found out that Scarlett Johansson would be playing The Major, I immediately wondered why Rinko Kikuchi (who played Mako Mori in Pacific Rim) wasn’t considered.  When I saw her in Pacific Rim, I immediately thought that that was what The Major would look like in real life.  I would love to see Rinko Kikuchi in this film; I would have equally been happy with any Japanese actress.  Not that I don’t love Scarlett Johansson like I’ve stated.  But I fear that this movie will read like an alternate universe for Black Widow and The Major is so much more than that.

First Impression of The Major

The quiet voice The Major combined with the particular scenes highlighted in the trailer didn’t give me a sense that this is a representation of The Major that I’m used to from the anime. I vaguely remember the animated movie being similar to how she’s portrayed in the trailer, but I was hoping for something more akin to the anime.  The anime Kasunagi is quick-witted, personable, extremely intuitive to her surroundings and circumstances, and—quite frankly—a kick-ass killing machine when she needs to be and a damn good detective in her line of work.  The trailer for the live-action film, on the other hand, portrayed a kick-ass Major for sure, but she seemed confused about social interactions, meek, vacant behind the eyes, distant, and kind of a blank slate and shell of a person.  I’m not sure if this is an origins story for the franchise (more on this momentarily), but The Major just didn’t seem quite right to me.

One of the most iconic things about The Major is her style and her hair cut and color.  Sure, the original anime was drawn and aired in the early 2000s and suffered from a lot of 1990s anime stylization with lots of exposed skin, unnatural proportions, and more leather jackets that the foreseeable future could produce.  The Major looked substantially different in the trailer than what I remember of the anime.  Most noticeably – her hair. In the anime, her hair is purple.  In the animated movies, I can’t recall the color of her hair, but the cut was the same.  And sure, someone will probably tell me that “purple hair in Japanese anime is meant to represent black hair in various lighting” or something along those lines – but not The Major’s shade of purple. Oh no. Her hair is the purple of a sassy gay deep v-neck t-shirt!  I guess I had been hoping to see the purple hair on Scarlett Johansson, as that is how I always picture The Major. And although the haircut is close – it’s still not quite right.

First Impression of the Plot

Like I mentioned earlier – this trailer made the movie seem like an origins story where The Major is more machine than human, no memory of her former life prior to her cybernetic implants, and she’s learning how to interact with the world in her current, upgraded form.  I’m not entirely excited by what little of the plot I saw, as it seems like a regurgitation of most everything I’ve seen or read that has to deal with synthetic life (who am I, what is my purpose, why was I created, blah blah blah).  I get the feeling that this is either going to be a plot intensive movie, which would be in line with the animated series as it had a plot thread about the laughing man that ran all the way through it, or it is going to be light on plot and a lot of senseless action with cool camera angles.  There isn’t enough to go on. But maybe that’s a good thing because I don’t know enough to have the movie utterly ruined for me by the trailer.

A lady on lady kiss in the trailer? Goooo ooooon.

Yup, you read that correctly. For those of you who haven’t seen the trailer (I’ve put a link below to it for your viewing pleasure) the saving grace that got my metaphorical hackles to flatten was a brief kiss between The Major and some woman.  I have no idea who the woman is, what her significance is to the plot or to The Major herself, but I’m all about women kissing women in mainstream media!

So will I go stand in line on March 31st, 2017 to see this movie on opening night? You bet your adorable ass I will.  Despite my disappointment in the particular casting choices made for the leading roles of the film (simply based on race – not acting ability), I feel the need to support female-led movies, especially if it nods towards mainstream queerness. Cause, let’s be honest, I’ll always pay money for women kissing women.