Crusading journalist Nathaniel Roy is determined to expose spiritualists who exploit the grief of bereaved and vulnerable people. First on his list is the so-called Seer of London, Justin Lazarus. Nathaniel expects him to be a cheap, heartless fraud. 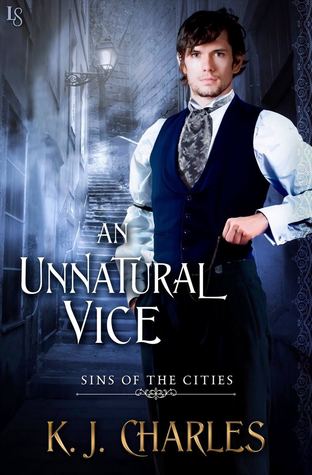 He doesn’t expect to meet a man with a sinful smile and the eyes of a fallen angel—or that a shameless swindler will spark his desires for the first time in years.

Justin feels no remorse for the lies he spins during his séances. His gullible clients simply bore him. Hostile, disbelieving, utterly irresistible Nathaniel is a fascinating challenge. And as their battle of wills and wits heats up, Justin finds he can’t stop thinking about the man who’s determined to ruin him.

But Justin and Nathaniel are linked by more than their fast-growing obsession with one another. They are both caught up in an aristocratic family’s secrets, and Justin holds information that could be lethal. As killers, fanatics, and fog close in, Nathaniel is the only man Justin can trust—and, perhaps, the only man he could love.

I have a fascination and love for historical romance, with how much work and research is put into each novel, but the last one I read, unfortunately, left such a bad taste in my mouth that I haven’t picked one up for quite some time (it lacked content warnings for some serious trigger-worthy content). An Unnatural Vice was the perfect book to rekindle my enjoyment of hist-rom.

This is book two in the Sins of the Cities series but each book seems to be standalone. Naturally, I just dove into this book without knowing what to expect and I adored it. Enemies-to-lovers for the win!

Nathaniel Roy is determined to expose Mr. Lazarus, supposed Seer of London, as a fraud, a fake, a false prophet but he’s too distracted by the mysticism and beauty of the man to figure out how he conducts his trickery. He feels as much disgust in Justin Lazarus as he does intrigue and can’t deny he wants to know more.

The pacing was wonderful, switching between Justin and Nathaniel perfectly to display the delicious tension they’d created. These two are so vastly different from each other that they’re an excellent match. As a lawyer-gone-journalist, Nathaniel thrives to bring justice to the world and believes in fairness and helping your fellow man. Justin views life through the lens provided to him by his difficult upbringing: take what you can before someone else does. He cheats the rich and gullible out of money with convincing seances and he experiences no remorse for his trickery.

Initially, Justin doesn’t come off as a very likable character but I wanted to know more about him from the get go. No, he can’t truly speak to spirits but he sure as hell makes his clients believe what they want, that he is divine, can reach through the veil and speak to their dearly departed.

He feels no remorse for this, nor does he feel guilt when Nathaniel requests a solo seance and Justin tears him apart. Although morally gray, his character intrigued me and it was obvious from the beginning that he lived his life the way he did with purpose and reason. Being born in a workhouse and suffering through childhood left its mark on Justin.

Nathaniel sees Justin as an immoral man, set to snatch money from those grieving. He also can’t stop thinking about him.

There was a long-forgotten sensation in Nathaniel’s chest, a quivering tension that pressed on his ribs. “Is there a you and I?”

While Nathaniel attempts to help a friend investigate a familial mystery involving bigamy, murder, and an Earldom in need of a legitimate heir, he puts his interest of exposing Justin Lazarus as a fraud on hold. That is, until their situations merge. Justin is seen as someone with potential information and is kidnapped by money-hungry individuals looking for information regarding the true heir to the Earldom.

Nathaniel and Justin have some serious chemistry that begins during their first interaction and throughout the entire book. At first, it delves into the category of enemies, what with Nathaniel’s disgust in Justin’s business and Justin seeing him as a judgmental and self-righteous journalist, but they can’t deny the flare of attraction they mutually feel. This animosity continues until later in the book, proving for some hilarious banter and bickering, which leads to serious sexual tension. Though the two had an explosive attraction to each other, the consent was essential and displayed in a way that kept the dialogue respectful but done well enough that felt natural and didn’t disturb the tension.

Tell you what, my spirit guide’s a fucking tart.

This does end on a bit of a cliffhanger, not between the characters but on the mystery plot, which I would’ve liked to see resolved. I’m expecting it will be addressed in the next installment.

Although I hadn’t read the first book before this one, I didn’t feel as if I was missing anything vital, though now I may go back and read the first before I move onto the third. I really enjoyed this book and hope to find more satisfying historical romance with this author.