A Share in a Secret is the fifth installment in Jude Tresswell’s County Durham Quad fictional crime serial. The book is unapologetically queer staring five queer men in a polyamorous relationship, one of which who is asexual: 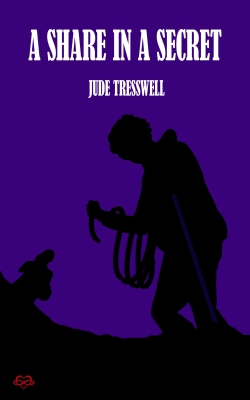 Mike, Ross, Raith and Phil are a gay, polyamorous quad who live in County Durham, North-East England. Mike’s nephews visit, and launch the quad into a tale involving inclusivity and investment scams, false arrest, and a desperate attempt to keep a dangerous secret hidden.

Nick Seabrooke is now living and working in the village. Can the quad navigate the complexities of a sexual-asexual relationship? They’d risk their safety for each other. Are they willing to do so for Nick?

This is the fifth County Durham Quad story. As always, background information is included for new readers.

I will preface this review by stating that I have not read the four other books in the series leading up to this one. At first, I was overwhelmed by the sheer number of characters on the page – the book starts with an abrupt sound and then Mike, Phil, Ross, and Raith having a discussion about Nick, who joins shortly thereafter. For any book, regardless of being the fifth installment in the series, it was a bit overwhelming to start with so many people on one page. But keeping in mind that I hadn’t read the other four books to supplement my knowledge of each of the characters, I was able to press on, patiently waiting for whatever plot the book was going to throw at me.

The biggest issue I had with A Share in a Secret stems from the fact that I went in expecting a full-fledged crime/mystery serial based on the book’s synopsis and wasn’t expecting the narrative to be so focused on the polyamorous relationship between Ross, Mike, Phil, Raith, and Nick. I was hoping for sleuthing, stake-outs, information gathering, and potentially some action chase or fight scenes. The book didn’t give me that. The book gave me a well adjusted polyamorous relationship and a lot of dialogue of what characters were going to do and dialogue following up on what they had done. There were few scenes of the characters specifically doing the actions to solve the case themselves. Just conversations of who they were or had talked to and what information they had.

The pacing of the book was also very slow for me as the non-relationship plot of the story comes in three acts but doesn’t show up until chapter five. Everything up to that point is setup. It was then resolved fairly quickly and it was back to focusing on the relationship. Then a similar thread rears up again in chapter ten and, again, resolves relatively quickly. In this act, we get to see Mike do some action but it is quick and quickly reverts back to the format of discussing what he found out with the other four men. The third act with a new plot thread pops up in chapter thirteen; this thread felt like it was the resolution to some plot from a previous book in the series based on the background knowledge that the narrative gave the reader and this was where the book started to feel more like a case to be solved. There were a few more scenes of the men doing things, tech was involved, a plan to infiltrate a police station was hatched, and it felt like it was finally ramping up with some good ol’ sleuthing work. But… this plot thread, the physical act of solving the mystery, was over in three chapters and nothing went wrong. Everything felt too easy. Despite that, though, the third act of the book was my favorite part of the book as it had more tension and more consequence and morality choices to be made. The first two acts of the book in comparison were slow and severely lacking tension in both the relationships and the plot machinations because it was substantially dialogue and summary of events. There was a lot of literal telling, but very little showing in the narrative. Act three had more physical action of doing things and was more enjoyable for me as a reader.

About halfway through the book I had to readjust my expectations and no longer expected the crime serial I thought I was tucking when I sat down to read. My expectation changed to reading A Share in a Secret more as a romance story than anything else. Once I was able to adjust to that, it was easier to get into despite still being overwhelmed by often having five characters on a page with massive amounts of dialogue. There was sparse tension and the few relationship spats that did occur were over too quickly to have any carryover or residual tension or drama between characters. Ross has a throughline of tension with his apprehension towards Nick, but it was often drowned out by the dialogue or summary within the book.

When reading the scenes of all five men I often lost track which of the five men were speaking unless it was Mike’s specific cadence or Raith’s general state of confusion. I really rather enjoyed the scenes where it was one-on-one with each of the men, though. The one-on-one scenes between characters were genuine and often thought provoking and centered around having something to drink, usually tea. This is one of my favorite quotes from the book, regarding just that:

If Nick had learnt one thing from proximity to the quad, it was that pots of loose-leaf tea were central to every discussion. Tea wasn’t just a habit; it served a purpose. Whoever was voicing an opinion had a moment to think and reflect as he paused to add milk and stir and sip and spoon out floating leaves and nibble one of the biscuits that always accompanied the drinks.

I especially enjoyed the scenes in which the men called to question how one thinks of something. Ultimately I wish there was a little more conflict throughout the scenes instead of blanket understanding and that characters were forgiven far too quickly with no seeming repercussions for their actions or harmful words. Aside from that, that one-on-one conversations between the five men were where the reader was really able to see the unique highlights of each of the men’s personalities. Nick and Mike, specifically, have some of my favorite scenes in the entire book. Nick asks questions that the other men in the core quad just don’t think to ask; questions about Mike’s past and why he thinks certain things. It makes for some really good dialogue where Nick calls Mike out for how gendered and heteronormative some of his thinking is and later it leads into a thought provoking moment for Nick, wondering why the other men don’t ask the same type of questions.

I also really liked that Nick was prominently featured and that his asexual orientation wasn’t shied away from being talked about and to see asexual representation in not only a men loving men relationship but also in a polyamorous relationship. It isn’t something I often see when reading through book synopsizes. There were a few scenes that felt off to me because a character would say “because he’s asexual?” to things that had nothing to do with Nick’s orientation, as if being asexual was the reason behind everything he did or didn’t do. Ultimately, though, I understood that Tresswell was trying to showcase some of the real life hurdles that asexual people experience in their day to day lives. I appreciated the character arc of Ross’ struggle with understanding why Mike would want to bring Nick into their family even if it felt uncomfortable to read at times because Ross saw Nick’s asexuality as an obstacle or incomprehensible oddity instead of a genuine orientation. It was tough to read through at times because of how ignorant some of the men were about asexuality but ultimately it had a wonderful resolution at the end of the book between Raith, Ross, and Nick. It was genuinely wholesome and made me give an audible “awe.” It is apparent that Tresswell set out to showcase that asexual/non-asexual relationships do work so long as there is continual communications and clear boundaries, which I was both happy to see and applaud for tackling within a work of fiction.

Now, normally I won’t explicitly justify my ratings, but for this one, I feel like it is appropriate. I’m rating A Share in a Secret two and a half out of five rainbows based on the book as a stand-alone article. The rating comes down to the structure of the story, the sheer amount of dialogue, lack of tension, and feeling like a good 70% of the book was summary instead of active action. Who knows, reading the rest of the series could potentially change the rating by giving me a more grounded insight into the main characters and maybe a better understanding of the third act of the book (which is still my favorite part of the book, mind you). But those things don’t change the core things that I feel were lacking. The relationships, which take center stage of this installment of Tresswell’s County Durham Quad crime fiction series, are interesting and provide some thought provoking moments of self-awareness and self-reflection for the five men which I enjoyed as a reader. I also liked the representation of sexual orientations among a polyamorous relationship and how the men counterbalanced each other. I just wanted less talking, more action, and so much more tension or conflict.

Recommended Reader: Readers who are looking for men loving men polyamorous representation or male asexuality representation. This book does not contain any sex scenes but does talk about sexual acts in the dialogue between characters.

You can find more from Jude Tresswell on her website, an episode of the Gay Mystery Podcast, and her Goodreads or Amazon author page.

Book Provided by Author: The Queerblr was provided a copy of A Share in a Secret for free by Jude Tresswell for the purpose of doing a review; this has in no way affected the review and rating of the book that was written by The Queerblr.